DESCRIPTIONSCREENSHOTSSYSTEM REQUIREMENTSTRAILER.NFO
About This Game
P·O·L·L·E·N is an atmospheric, suspenseful and highly interactive first person sci-fi exploration game set on Saturn’s moon Titan. Inspired by science-fiction classics such as Solaris, 2001: A Space Odyssey, and the Moon, P·O·L·L·E·N’s retro futuristic world is an incredibly detailed, living-breathing environment, that feels every bit as real as the one around you. Each step in the shoes of a space mechanic will transport you into the Station M, where you can try everything you can get your hands on to solve intriguing puzzles and uncover the mysteries that lie beneath the moon’s crust.

P·O·L·L·E·N has been designed to deliver a great experience on both regular monitors and virtual reality headsets, and is set to be released spring 2016 for Windows.

ONE GAME, TWO EXPERIENCES
Get ready to play P·O·L·L·E·N in two uniquely different ways; a captivating first person exploration game on a traditional monitor, or a fully immersive virtual reality experience that transports you to the surface of Titan.

FULLY INTERACTIVE ENVIRONMENT
Because Station M was created to feel every bit as real as an actual lunar research station, almost everything on the base is interactive. Even a small, simple item could be the key to solving a puzzle, and unlocking one of the many secrets of Station M.

PROFOUND STORYLINE
What lies beneath the surface of Titan? Experience the existential journey of P·O·L·L·E·N that’ll intrigue, surprise, and stay with you long after leaving the base. Return to Station M to discover new layers of the story that may have remained hidden on previous playthroughs.

UNIQUE SOUNDSCAPE
The sounds of Station M also have a story to tell. Listen closely to the atmospheric audio while exploring RAMA’s 13th moon base. P·O·L·L·E·N’s real time binaural soundscape has been designed to let you perceive audio in the most natural way, as human ears hear it. 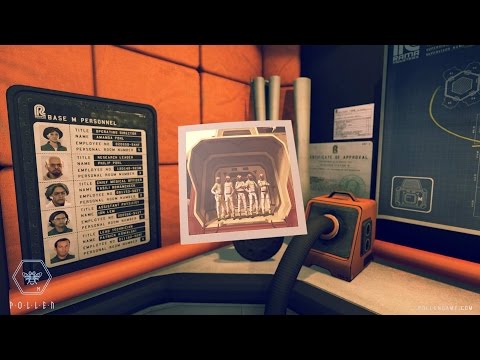 February 2, 1995 – Research Base M, Kraken Mare, Titan. In an
alternate timeline of history, where the Kennedy assassination
failed and the internet was never invented, the space race
continued to boom as the Soviet and US programs combined their
efforts to conquer the vast mineral rich expanse beyond Earth.
Handing their findings over to private companies, governments gave
way to corporations who would soon establish mining & research
colonies all over the Solar System.