DESCRIPTIONSCREENSHOTSSYSTEM REQUIREMENTSTRAILER.NFO
About This Game
You awaken stranded on a hostile alien world, after your journey to colonize the planet. Rhyldan, takes a catastrophic turn. Armed with only your fists, your wits and fragments of knowledge buried deep within a damaged clone’s mind, you must ensure the survival of the human race. Harvest local resources to get started, and hunt wildlife with crafted weapons to provide food and protection from the elements. As you survive you will regain access to knowledge and important skills to aid in your survival. Unlock advanced technologies to build giant structures, advanced weaponry and defenses, tame the wildlife, engineer and grow new living species, build robots and vehicles and use it all to support your allies or crush your enemies.

Fragmented is available in multiple rulesets allowing for PvP focused content, or working together with other players to survive against the environment. Play online or in single player mode. Players will have the option to host their own servers as well and tweak many of the settings to provide an easier experience or a much more harsh experience including hardcore options.

Surviving in the world of Fragmented has its advantages. As you gain more experience you will be able to unlock higher level skills opening up different play styles and survival options. You can focus on combat related skills to take the fight to the wildlife or your enemies or you can focus on skills that will improve your base and your storage capabilities. Fragmented features a level system that grants points you can spend on a handful of skills to better customize your character. You can spend the points on the following skills.

Construction allows you to create buildings, props, storage containers, and various types of crafting stations.
Electronics includes the creation of Electronic Devices, Turrets, Medical Scanners, or Robotics.
Melee provides bonuses in melee combat, as well as the creation of melee weapons and tools.
Ranged provides bonuses in ranged combat, and allows creation of ranged weapons and grenades.
Refining is used to process raw materials, unlocks harvestables, and creates tools.
Subsistence reduces the effects of hunger and thirst, and allows the creation of foods, drinks or medical compounds. It also includes genetic engineering on the high end.
Survival increases your health and allows the creation of traps, torches, and campfires, as well as basic tools and waterskins.
Textiles is used to create armor, clothing, pouches, and backpacks.
Harvesting

There are many different types of harvestable resources in the world, including dead creatures. Primitive tools will get you the basics, but you will need to build better tools to achieve better results and to gain access to rare materials. Creatures also increase in difficulty as you venture out, including boss encounters and other surprises.Using better tools and fighting harder creatures you also can run across rare resources that can used to create even more powerful weapons and tools.
Rulesets and Hosted Servers

Fragmented will be offering a variety of ruleset configuration options, catering to many different playstyles. This includes PvE and PvP options, both with casual, normal, and hardcore modes, all available on the official servers. If you wish to host your own server, you will have control over those options, as well as having more granular control over the other aspects of the game, such as food/thirst rates, damage, mob difficulty, experience gained and several others. 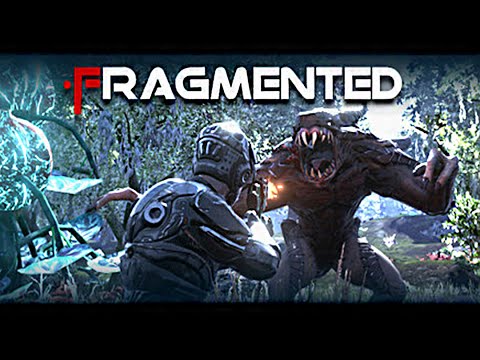 Fragmented (c) Above and Beyond Technologies

You awaken stranded on a hostile alien world, after your journey to
colonize the planet. Rhyldan, takes a catastrophic turn. Armed with
only your fists, your wits and fragments of knowledge buried deep
within a damaged clones mind, you must ensure the survival of the
human race. Harvest local resources to get started, and hunt
wildlife with crafted weapons to provide food and protection from
the elements.